A gay author has praised striking teachers at the Catholic Boys’ School where his World Book Day speech was canceled after the Archdiocese of Southwark raised concerns about his ‘faith-insulting literature’ “.

Simon James Green was due to visit John Fisher School in Purley, Croydon, to discuss his queer fiction.

The award-winning author has written 12 books for children and young adults featuring LGBT+ characters, including Heartbreak Boys, Noah Can’t Even, and Gay Club! – which comes out on May 5.

Author Simon James Green was due to visit John Fisher School in Purley, Croydon, last month, but the visit was canceled due to concerns about the content of his books. Pictured is Mr Green at another conference

Since his visit was canceled last month, teachers have gone on strike as staff shortages shut down the school.

On Thursday, Mr Green tweeted his support for teachers. There were around 40 people outside the school gates as part of the National Education Union (NEU) action, the BBC reported.

“@NEUnion members at John Fisher School are on strike over my school visit being banned and their governors being sacked,” Green said.

“They are standing up for LGBT students everywhere who need to see the reality of their lives in the books. Please show them how much support they have.

Daniel Kebede, national president of the NEU, said the strike was an “absolute last resort”.

“Staff and pupils are absolutely disgusted with what has happened,” he told the BBC. 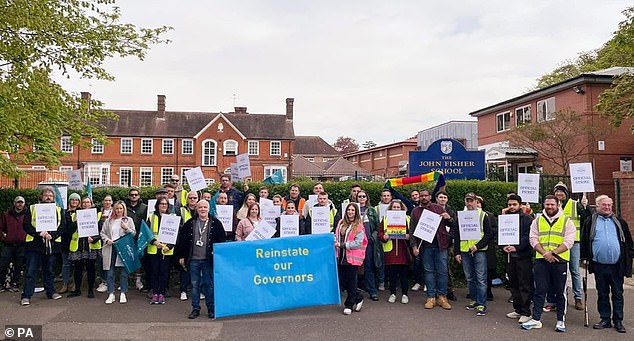 school on Thursday, with teachers going on strike against the Archdiocese of Southwark’s decision to ban the author.” class=”blkBorder img-share” style=”max-width:100%” />

Around 40 people were protesting outside the school on Thursday, with teachers going on strike against the Archdiocese of Southwark’s decision to ban the author.

“Banning a gay author from attending a book conference at school sends a truly horrific message to young people in that school and especially those who may be gay or lesbian.

“I would like everyone to think about how these particular children are feeling right now.”

The school had planned to host the author on March 3, but staff were advised to cancel the visit by Diocesan Commissioner of Schools, Simon Hughes.

In a March 3 statement, Dr Hughes said: “From time to time, materials or events emerge for consideration that fall outside of what is permitted in a Catholic school.

“In such circumstances, we have no alternative but to affirm our unequivocal and well-known theological and moral precepts and to act in accordance with them.”

Principals voted against this recommendation, but intervention by the Archdiocese saw the event cancelled.

This prompted two governors to resign, with the others being removed from their posts by the archdiocese, according to an Ofsted report.

There was a sudden inspection on March 16, after the incident earlier that month.

Simon Hughes, Diocesan Schools Commissioner, said the books by Mr Green (pictured) ‘do not fall within the scope of what is allowed in a Catholic school’

In a letter sent to school headmaster Philip McCullagh on Monday by Ofsted Inspector Sarah Murphy, Ms Murphy wrote that ‘the elected parents and staff governors, together with the local authority governor’ n were no longer in their roles after the incident, but “have since been reinstated”.

She said “some leaders, staff and students felt angry, confused and frustrated” by the situation.

“Others are concerned about the impression these events might have on the school’s ethos,” she wrote.

The archdiocese has now reacted to the report, saying it contains ‘inaccuracies’ and includes evidence ‘only from the media’, and called for another review.

In a statement, he said: “Respect for the God-given dignity of every human life is at the heart of Catholic education and respect is a two-way street.

“Literature that insults the faith, which in the case of Mr. Green’s book was a highly sexualized re-writing of the Lord’s Prayer, naturally offends many Christians and as such has no place in a school Catholic.

“It is important that the school can now move on, and the Diocesan Education Commission will continue to work with the local authority, the board, unions and senior management at the John Fisher, in the best interests of parents, students and all staff.

The Archdiocese’s stance has drawn widespread criticism over the ‘message’ it sends to LGBT+ students. 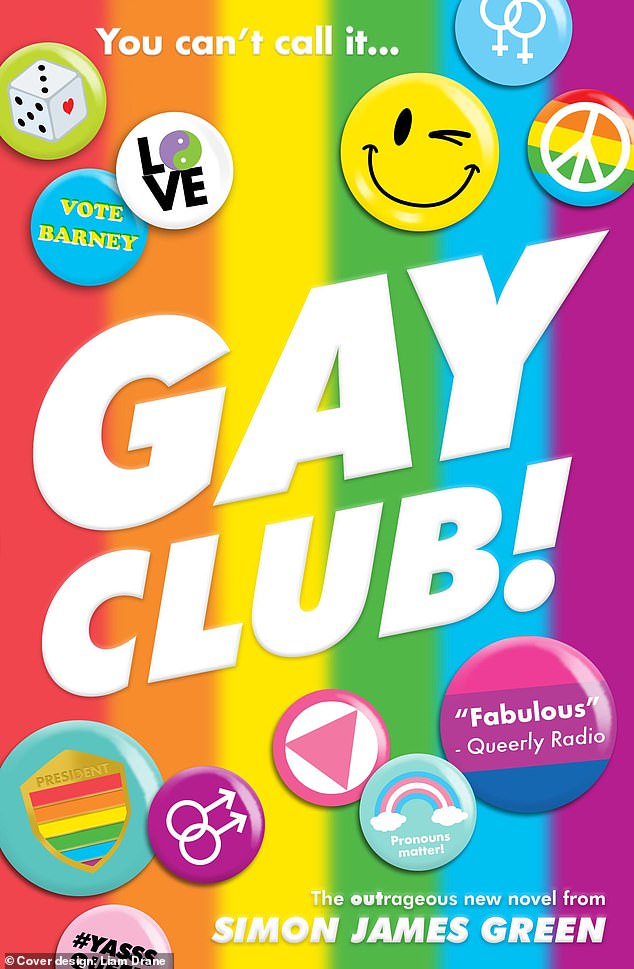 The award-winning author has written 12 books for children and young adults featuring LGBT+ characters, including Heartbreak Boys, Noah Can’t Even, and Gay Club! (pictured) – out May 5

Headteachers from the NAHT Headteachers’ Conference in Telford on Friday called on Education Secretary Nadhim Zahawi to investigate the Archdiocese, UK News reported.

Speaking at the event, Beaconsfield Primary School Principal Dave Woods said: “To students, staff, parents, this sends a message of intolerance or a reminder of those dark days of exclusion and invisibility to this anomaly, which many LGBT adults remember or try to block out their own past experiences.

And the headmaster of a Church of England school, Clive Leach, said: ‘This action is not the faith I have as a Christian… it’s not like Christ as I understand him would hold him – he stood with those who were different”.

Leaders voted for a motion, which also called on NAHT members to “stand in solidarity with the staff and governors of John Fisher School who recognize the value and celebrate the humanity, rights and lives of LGBT+ youth. in their community”.

John Fisher School staff sent a video to conference attendees, thanking them for their recent support.

“We belong to a great school and the governance is in disarray,” they added. “The events of the past seven weeks have put a strain on our community.”